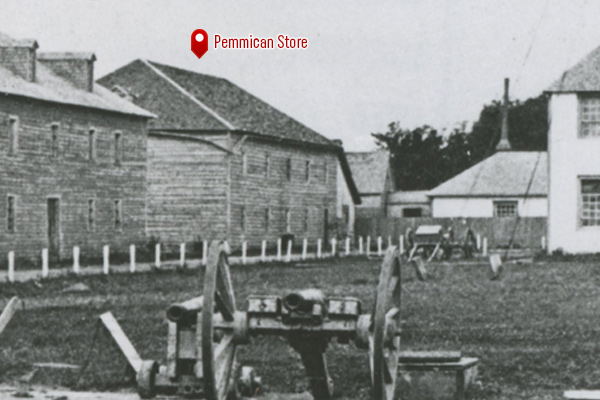 In 1846, roughly 300 soldiers marched through the gates of Upper Fort Garry, changing the Fort and its inhabitants forever. The troops, members of the 6th Regiment of Foot, plus a detachment of Royal Engineers and a detachment of artillery, took up about 80% of the Fort’s area, eventually causing construction to spill beyond the north wall. The soldiers limited the Fort’s storage space in two ways. The Hudson’s Bay Company had to obtain extra food sources, meaning more bushels of wheat, more sacks of pemmican, and more tons of ice, which took up room. In addition, older storehouses were converted into barracks (buildings and rooms where soldiers eat and sleep), which then couldn’t be used to store goods. Consequently, the new ‘flour store’ was built along the east side of the Fort in 1846. However, even more storage space was needed and so, in 1848, a second storehouse – which came to be known as the ‘Pemmican Store’ – was constructed.

The Pemmican Store was built in the Red River style across from the flour store in line with the west row of buildings. Like the flour store, it was about 30 by 70 feet. Plains provisions, such as pemmican, were received on the lower floor of the building while the two higher floors were used to store bags of grain. The grain was threshed by flail in the winter and transported by barge to the Riel Mill (operated by Louis Riel’s father) for grinding. Various modifications were made to the store in later years.  A big lean-to which almost doubled the store’s size was attached to its west wall some time before 1857. A second, two-storey lean-to with horizontal siding was added to the storehouse’s north wall in the 1870s.